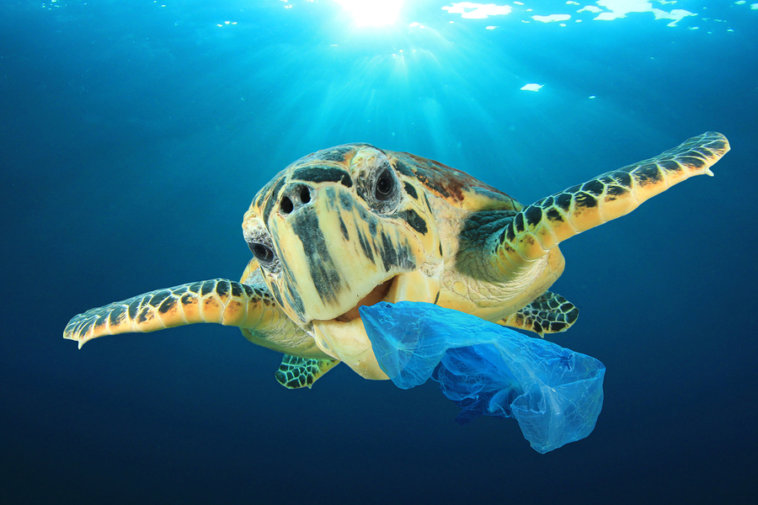 Many people are still unaware of the devastating effects of plastic pollution. Some don’t think about the ocean or the wildlife in it when sipping on sodas and where those plastic bottles can end up if they aren't careful. But the reality is, this kind of nonchalant behavior will result in a disaster.

More and more sea animals die because of consuming or getting stuck in plastic products. Landfills keep getting bigger because plastics can take up to 1,000 years to decompose.

This is a scary reality – but it’s very much our reality. As a species, we can do a lot to change that. If united, it's possible we can undo some of the damage – just imagine if everyone in the world would just quit producing and using plastic disposables. However, since that will never happen, you can do a lot as an individual, starting from giving up plastic to influencing other people.

Read on for more information on plastic pollution and how to stop it. 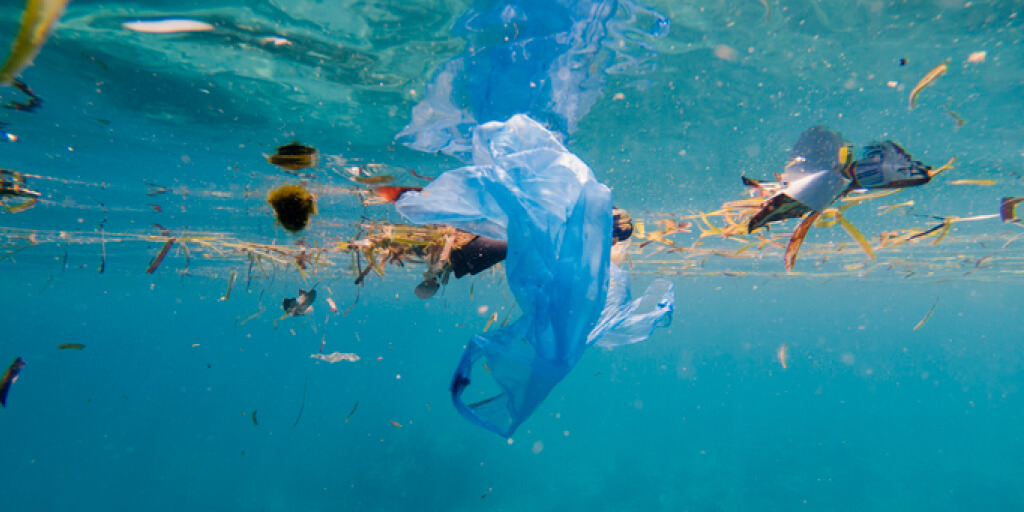 What are the Effects of Plastic Pollution?

Because of its widespread usage, plastic is one of the greatest threats to our environment. It’s also very durable and it always ends up causing danger in:

Marine animals as well as land wildlife often confuses plastic waste for food. Since most of the plastic is toxic when consumed, this is highly dangerous for them. Humans are also affected by the toxic chemicals in plastic.

Here are some of the impacts that plastic has on us and our planet:

As mentioned, animals often mistake plastic for food, especially the sea animals. Many dead specimens have been found with stomachs full of plastic. Plastic fills their digestive system and it can either poison them or block their digestion system. This can cause them starvation. They can also get trapped in plastic and thus become more exposed to predators or die of starvation. Plastic is also highly dangerous for land wildlife.

So, not only are we poisoning the nature, environment and the planet in total, but we are also poisoning ourselves. Chemicals from plastic upset the endocrine system, thyroid hormones and it can be extremely dangerous for women and young children.

Plastic has destroyed the quality of land in many ways. Some of the examples of that are the landscape, possibility of use, support for life forms and so on. Plastic can also cause serious problems for people within the range of landfills.

When humans burn plastics, it leads to air pollution because it releases poisonous materials. It can cause respiratory problems.

Plastics from landfills release chemicals which are washed down into the earth when it rains. This pollutes our water sources and poisons the water we drink.

Lakes, oceans, rivers and so on aren’t left out on this list. Plastic debris is causing animals to die and hazardous chemicals released poison us. Frightening piece of data is that 40% of our waters are covered in plastic.

Plastic interferes with the food chain

Small animals like plankton, worms, fish, and insects intake plastic in some form at one point or another. Then when larger animals consume them, this plastic is transferred to them and so on – this goes all the way up to the top of the food chain right back to us. This causes animals to have less offspring which disrupts the food chain even more.

One of the least important elements on this list (but one that might make people reconsider what they are doing because they are losing money) is the fact that plastic pollution makes beautiful places look ugly. It also makes people lose a lot of money on cleaning the plastic debris. 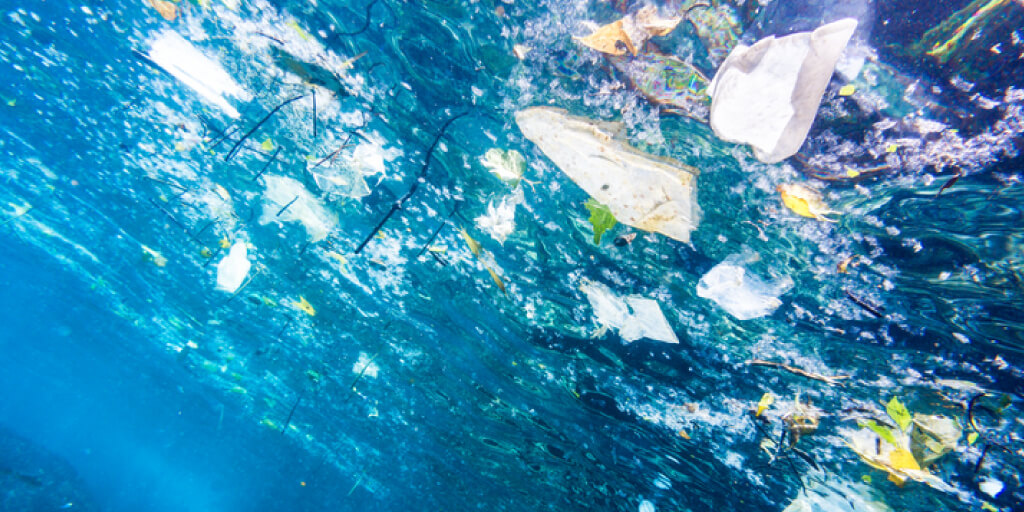 Oceans have become soups of garbage. Our land and air are polluted. And all of it is because of plastics and industries that create it, as well as us who buy it. And while some may not care about the sea creatures nor the environment but plastic also causes numerous health problems for humans.

It's uniquely problematic because it's not biodegradable which means that it will stay here for years and years to come. Our grand-grand (many grands) children will even be able to see it. Just imagine – you could throw a bag of chips in the street right now and hundreds of years later, people will be able to see it.

But how do we stop plastic pollution?

Good news – there are many small ways you as an individual could make an impact. 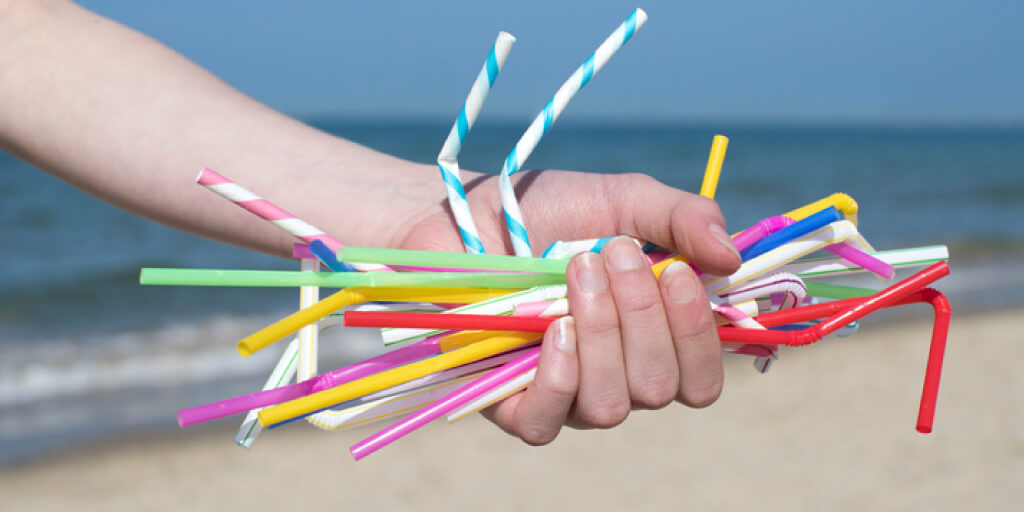 Do you know how much litter comes from disposable plastics? Ninety percent. So, this means that:

are the major culprits for all of the damage. Now imagine how much disposable plastics you produce. A lot, right? Well, you could change that by simply replacing disposables with something more durable. So, take a bag to the store, bring some silverware to your office and   or in a travel thermos.

Water bottles are another huge problem. But, instead of buying plastic, you should carry a reusable bottle in your bag and refill it. Water issues in your area? Invest in a water filter.

You know those scrubby beads in your favorite scrub or exfoliator? Those are usually made of plastic. Not only can they be harmful for your skin but they are also very small and easy to slip through the water treatment plants. They also look like food to animals. Instead, buy products with natural exfoliants. Even better, make your own scrub with oatmeal, salt, sugar and other safe alternatives.

4. Cook food instead of buying

This will be healthier for you and much better for the environment. Takeout usually comes with a lot of waste in the form of plastic and paper. When you do order food, tell them you don’t need cutlery or bring your own food containers.

Instead of buying fresh and new electronics, furniture and other items, it’s always better to buy second-hand. Look for garage sales, thrift shops or online. You’ll save money too.

Did you know that less than 14% of plastic is recycled? If you want to start being more responsible with your recycling, learn more about which plastics can be recycled in your area.

This is a simple thing you can do next to carrying your own bag to the store. Urge your officials to enforce a plastic bag ban or tax.

Tiny packages result in more plastic waste. Buy in bulk, especially things that you use often. 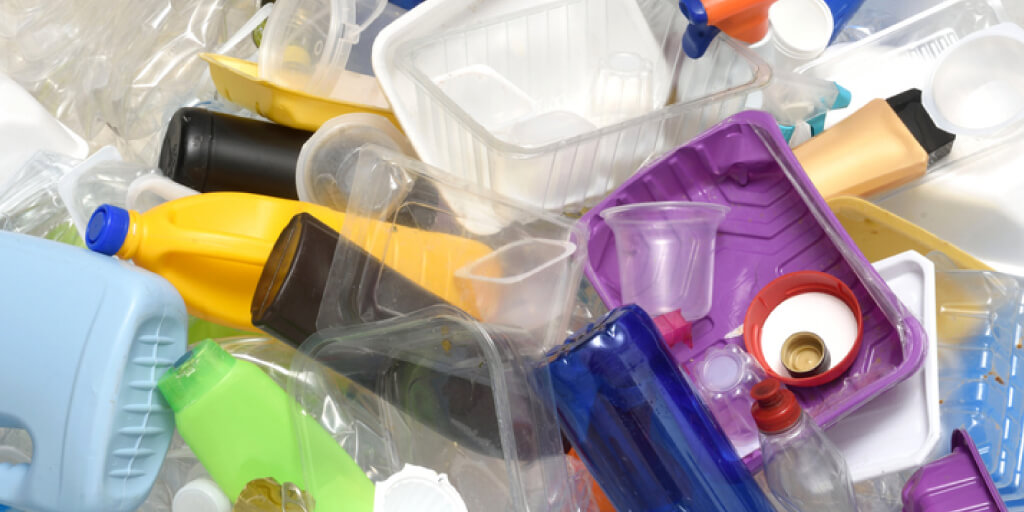 Share these tips and your own recycling hacks with friends and family. Encourage others to practice your good habits!

10. Participate in a Beach Clean Up

Help save marine lives by helping out in a beach clean up. No waves near you? Organize to clean up a park, forest, lake; anywhere that could use a little help.

How Long Does it Take for Plastic to Decompose?

This is a really important question. We need to be aware of what a single bottle we throw away can do – let alone all of the waste we create.

For one, the rate of the decomposition will depend on what the landfill is like.

This is the big problem with plastic. Paper products are often used wastefully, but it takes about three months to decompose and it’s not as toxic. Not to mention that it’s more widely recyclable. But plastic stays for centuries. We should all keep that in mind when trying to reduce the amount of plastic you produce.

Wouldn’t that be an amazing change? 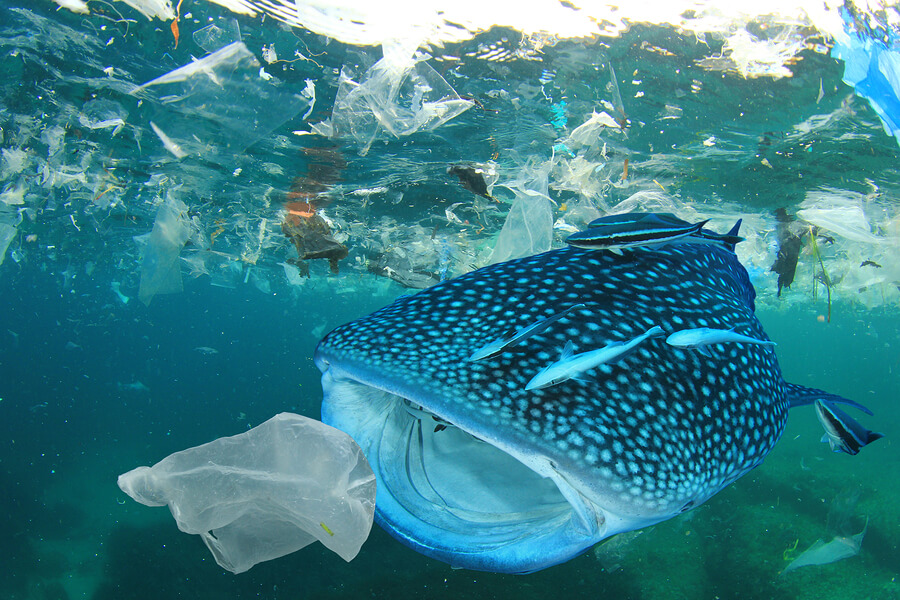 How Many Animals are Killed by Plastic?

From corals to whales, marine species are by far the most endangered by our plastic pollution. More than 700 species are being killed by plastic ingestion or getting trapped in plastic. This results in more than 100 million deaths a year which are recorded, more that we don’t know of.

Sea turtles are the most endangered. More than 50% of them eat plastic and 50-80% of all dead turtles are found with plastic in their stomach.

Ocean and sea mammals like whales, dolphins and seals are also under impact. More than 100,000 marine mammals get killed by plastic.

There are even more cases from earlier years.

At least a million different species of fish are found dead of plastic each year. Two thirds of sea birds are affected; sea birds like albatrosses feed their chicks with plastic which results in them dying.

Coral species starve, blocked by microplastic. Almost half of all camel deaths is caused by plastic. Other animals like elephants and reindeer are also suffer negative impact. In fact, eight African elephants died in 2016 after consuming plastic bags. 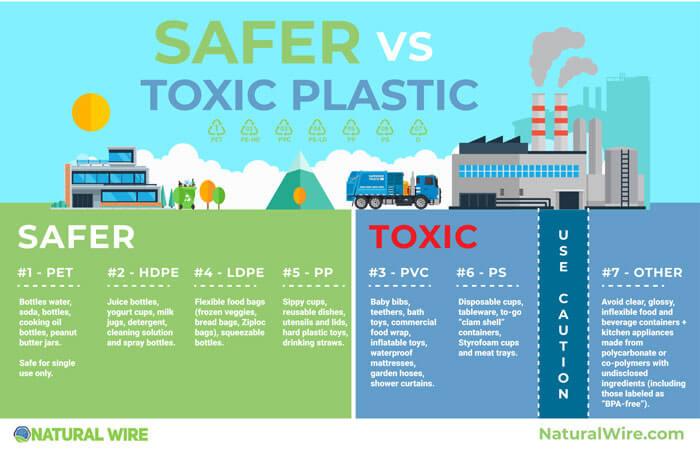 There are several types of plastics:

PET or PETE – This type is found in cosmetics packages, household cleaner, water and juice bottles, salad dressings bottles, oil bottles and so on. While it’s not as dangerous as other types, you should never reuse it.

HDPE – This type of plastic is found in toys, detergent packaging, milk jug, folding chairs and tables and so on. There are no known health concerns.

PVC – This is a type of plastic found in shower curtains, pool toys, anything inflatable, clothes, car interior and so on. It’s highly toxic and you should avoid it.

LDPE  – This type you’ll find in plastic bags, some packaging and so on. There are no known health concerns.

PP –  This is used in yogurt tubs, plastic cups and baby bottles, kitchenware and microwave plastic. There are no health concerns but you shouldn’t reuse it.

PS – This type is used in disposable cutlery, CD and DVD cases, foam cups and to-go packaging. Long term exposure is bad for your health.

Plastic #7, Other – This is tricky because it can have BPA or not. Commonly labeled as PC. You can find it in CD or DVD cases, baby bottles, reusable bottles and so on. 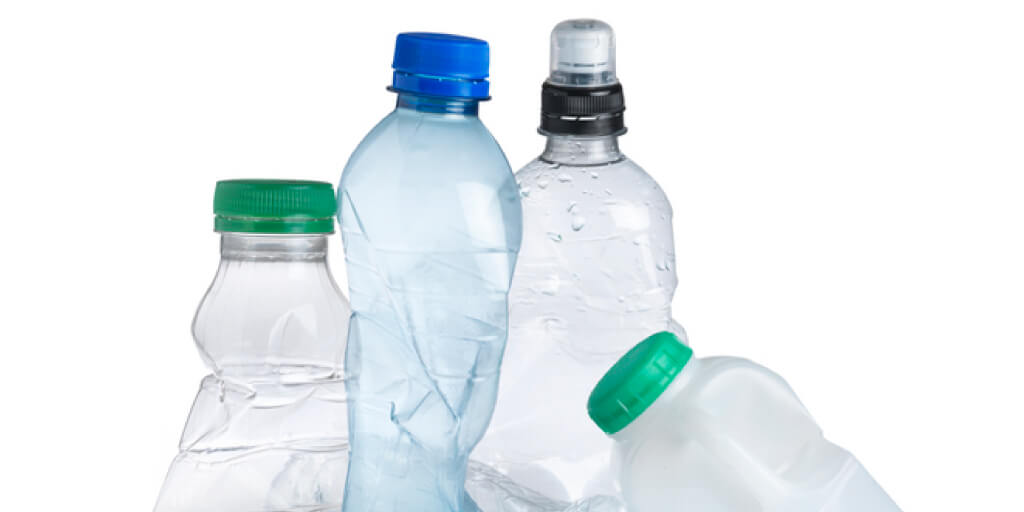 What are the Safest Plastic Numbers?

No plastic is truly safe but if you are looking for the safest option, go for HDPE, LDPE, PP or PETE. However, don’t heat it or expose it to chemicals.

Plastic pollution is a real problem in the world. However, we can decrease it if we all make an effort to ditch plastic and replace it with something healthier and better for us and the environment.

Do you have any great plastic pollution solutions? Please feel free to share them in the comments down below! 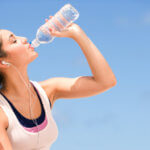